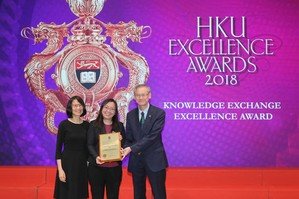 Warm congratulations are extended to Ms Rebecca Wing Chi Lee and Professor Lusina Kam Shuen Ho of the Faculty of Law, who received the Knowledge Exchange (KE) Excellence Award 2018 for their project “Introducing the Special Needs Trust to Hong Kong”.

For many years, parents of children with special needs live with an agonising worry: since their children are unable to manage their own financial affairs, what will happen to the assets the parents set aside for the children’s care and well-being once they pass on?  The trust is an ideal mechanism for professional asset management, but the capital and fees involved place it beyond the means of most families.

Professor Ho and Associate Professor Lee’s research has directly led to the setting up of a special needs trust (SNT) in Hong Kong.  They proposed an SNT model that saves costs by pooling the funds contributed by parents for investment.

Their suggestions were submitted to the Government in an informal policy paper in October 2015 and they received a quick response.  In February 2016, the Government set up a working group to investigate the feasibility of establishing an SNT and appointed Ho to provide expert advice on the SNT’s design.  Ho and Lee also collaborated with the Concern Group of Guardianship System and Financial Affairs, an NGO, to provide supporting data and convinced the Government that a government-managed SNT was both desirable and feasible.

After allocating HK$50 million to set up an SNT office in February 2018, the Government formally launched the SNT in December 2018.  The SNT is able to benefit the families of some 250,000 individuals whose disability (be it intellectual disability, mental illness, or autism) renders them unable to manage their own property affairs.  It also affords parents peace of mind in knowing that, upon their passing, their children’s well-being will not be affected.

In having a government act as trustee, Hong Kong’s SNT is the first of its kind in the world.  On the back of its success, NGOs in South Korea invited Ho and Lee to explain the workings of the SNT to the Korean Government, which then decided in 2018 to launch its own SNT.

Watch the KE video on their project: https://www.ke.hku.hk/story/video/snt

The university-level KE Excellence Award was introduced in 2015-16 to recognise the significant impact that our academic staff had made to benefit society.

Interdisciplinary Quick Talks is a new HKU Knowledge Exchange (KE) series to promote interdisciplinarity and to share evidence-based knowledge on challenging issues from multiple perspectives with the community.

The inaugural event of this KE series, with the title ‘Open Data Open Possibilities’, was successfully held on February 15, 2019 at the Rayson Huang Theatre, The University of Hong Kong with over 200 participants from different sectors including government departments, institutions, secondary schools, and technology companies.

This event provided an opportunity for our researchers to share with the participants their views and project outcomes using open data, and discussed new ideas for interdisciplinary research and knowledge exchange that could be made possible by open data.

The following talks were delivered by our researchers at the event:

Video on their presentations can be viewed on our website: https://www.ke.hku.hk/event/odop

The HKU Three Minute Thesis (3MT®) Competition 2019 was successfully held on March 7, 2019. This year 17 final-year MPhil and PhD students participated in the competition. For details, please visit the 3MT website.

If you would like a hard copy of the newsletter, please send your request to keoffice@hku.hk.

KE Newsletter is published twice a year by the Knowledge Exchange Office, The University of Hong Kong.  We welcome contributions of content to the KE Newsletter.  Please direct your contributions to us at keoffice@hku.hk for consideration.