Getting Ready to Make an Impact 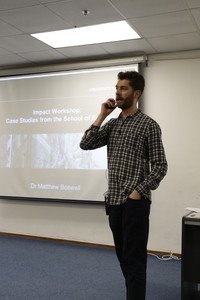 What is the difference between knowledge exchange and the impact of research? It is a question you may perhaps hear more of in Hong Kong over the next few years.

Every few years universities in Hong Kong are assessed for the quality of their research by the University Grants Committee. Assessment largely follows the model of the UK, but in its 2014 exercise the UK took a giant leap to adopt a new element.

"Impact" was given 20 per cent weighting in the UK's Research Excellence Framework (REF) 2014, the results of which will inform research funding and league tables. And not just any impact, but impact in the world beyond university walls. For many disciplines that has meant a huge shift in their thinking.

HKU well recognises the importance of this shift despite the uncertainty as to whether it may be introduced in Hong Kong at some stage. Achieving impact on society is the goal of knowledge exchange. To introduce the concept of impact assessment on campus, the Knowledge Exchange Office invited four researchers from the University of Leeds to share their experience in 2013/14. One of them was Dr Matthew Boswell, Arts Engaged Fellow, who was involved not only in Leeds' preparations for the REF 2014 but in his previous role at the University of Salford was responsible for developing the institution's strategic approach to impact and overseeing the implementation of new initiatives and policies, from the appointment of new impact support staff to the development of internal funding schemes.

"Impact assessment asks what are the benefits of knowledge exchange," he said. "That in turn is connected to the role of the university in a modern, digital, globalised world. The idea that a university is a closed-off place students pay to go to when they are 18 and after three or four years they leave, never to have contact again – that was a thing of the past, especially in a knowledge-based economy."

Leeds has shown public engagement and impact can be realised in the arts. For example, a professor researching cultural representations of autism helped to influence National Health Service policy and also worked with an opera company to develop a new work related to autism.

Working with others in the community is a central part of KE and of impact, but this has given rise to some reservations in the UK over whether funding assessments should be based on input from others who are outside the traditional "peer-review" model.

Dr Boswell said while these were legitimate concerns, academics could still control the KE side of things and they could benefit from community engagement. "Having debates with people outside academia can deepen your understanding of your own subject," he said.

For local researchers who are undertaking public engagement activities or doing KE work with community organizations, he advised them to start gathering impact-related data and corroborations now, since this would be very difficult to do as an afterthought. They would be useful in demonstrating the contributions made through the KE work, regardless of whether the impact element would be introduced in the research assessment exercise in future.