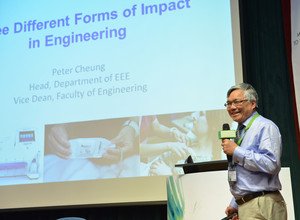 If you want to do something well, it's a good idea to seek advice from those who do it best. So it was that Professor Peter Y. K. Cheung of Imperial College London was invited to talk at HKU on navigating impact assessment.

Professor Cheung is Head of the Department of Electrical and Electronic Engineering and recently steered his department to a perfect score of 100 per cent on the Impact component of the UK's recent research assessment exercise (Research Excellence Framework 2014). This was the first time "Impact" beyond academia was a criterion and it carried a weighting of 20%.

"Secondly, it steers behaviour in such a way that people will think longer term because impact generally comes quite a few years after publication. It encourages us to do things that are ambitious and outward-looking."

Given that importance, Professor Cheung decided it was imperative that he, as department head, should lead the process. He selected examples of impact from his department's research output, gathered data, and pored over every word that went into their final submission.

"The head has to care; you cannot have surrogates when it comes to such an important exercise," he said. "This is not merely a summary of the department's work, but a showcase of the best research that it conducts and how to translate that into impact."

He took nothing for granted and backed up every claim of impact with hard facts, such as patents granted, industry prizes, consultancies and memberships on external committees – even the names of people his scholars had worked with, such as clinicians in hospitals and top management in industry.

The five best examples of impact were presented as case studies that were written up by assigned academics, called "case champions", who had not been involved in the research. They were people in the same field, so they could present a convincing, accurate summary of the underpinning research and the impacts to academics and professionals in the field but also make it intelligible to an outsider.

How did he manage to get all the support in the process? Well, because ultimately, the outcome reflected on the department as a whole.

"My advice to others is to always think about ownership. You have to persuade people that they own it. Individuals own their research output. Case champions own their case studies. I own the responsibility to ensure that the publications and case studies we submit are our best possible outputs. If you do ownership well, then you get good results."